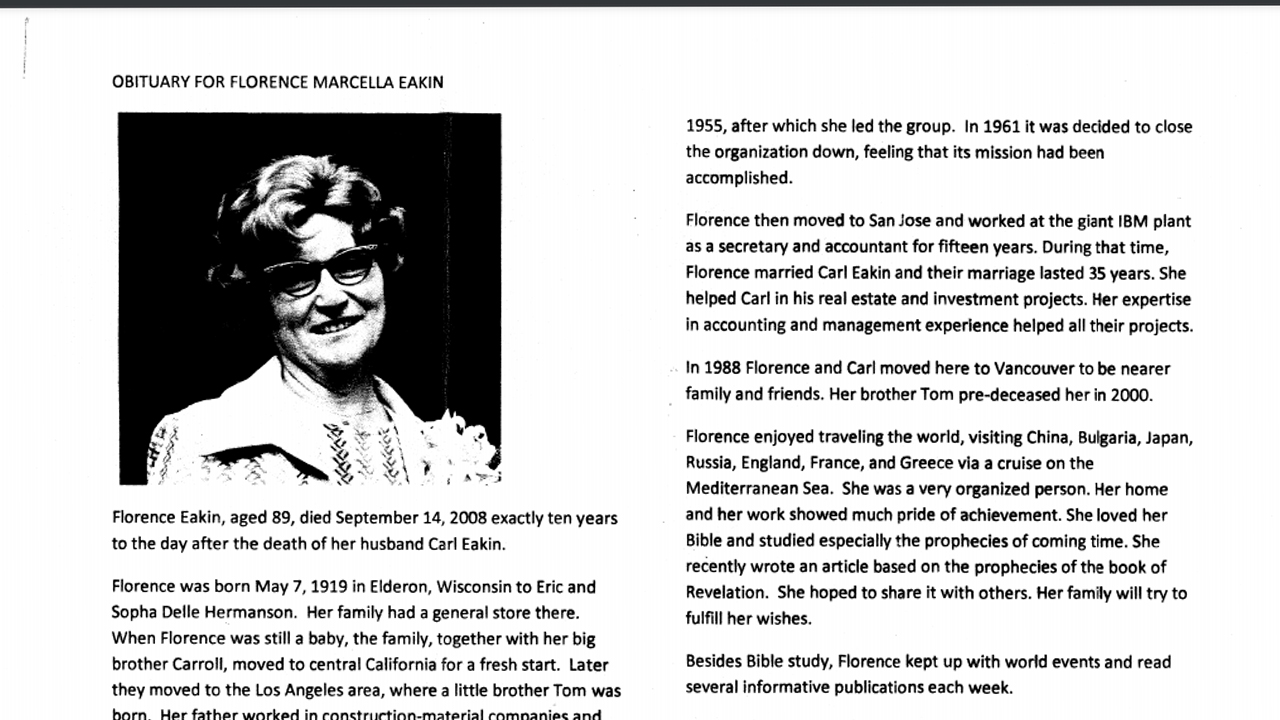 Posted at 07:31h in All Historical Transcripts, Florence Houteff by Kevin 0 Comments

Florence Eakin, aged 89, died September 14, 2008 exactly ten years to the day after the death of her husband Carl Eakin.

Florence was born May 7, 1919 in Elderon, Wisconsin to Eric and Sopha Defile Hermanson. Her family had a general store there. When Florence was still a baby, the family, together with her big brother Carroll, moved to central California for a fresh start. Later they moved to the Los Angeles area, where a little brother Tom was born. Her father worked in construction-material companies and later in the dairy business. This was the time of the great depression, and to cope, the family moved many times.

When Florence was a teenager, the family moved to Waco, Texas and she pursued her education with many correspondence courses. She successfully completed the International accounting course, a nursing course, a writing course, and other interests she had. She married Victor Houteff and joined him in establishing a religious printing and publishing organization that lasted until his death in 1955, after which she led the group. In 1961 it was decided to close the organization down, feeling that its mission had been accomplished.

Florence then moved to San Jose and worked at the giant IBM plant as a secretary and accountant for fifteen years. During that time, Florence married Carl Eakin and their marriage lasted 35 years. She helped Carl in his real estate and investment projects. Her expertise in accounting and management experience helped all their projects.

In 1988 Florence and Carl moved here to Vancouver to be nearer family and friends. Her brother Tom predeceased her in 2000.

Florence enjoyed traveling the world, visiting China, Bulgaria, Japan, Russia, England, France, and Greece via a cruise on the Mediterranean Sea. She was a very organized person. Her home and her work showed much pride of achievement. She loved her Bible and studied especially the prophecies of coming time. She recently wrote an article based on the prophecies of the book of Revelation. She hoped to share it with others. Her family will try to fulfill her wishes.

Besides Bible study, Florence kept up with world events and read several informative publications each week.

Recently Florence suffered several falls in her retirement home. She injured herself seriously on the last fall. She bravely went through many days in the hospital, more time in a therapy ward, but did not get better. She loved all the great care and gentleness the nursing staff gave her, but she suffered a massive stroke. Then when hope was lost, she died in the embrace of the Ray Hickey Hospice Home.

Florence told us she was ready to go. Her work was finished! She will be missed.