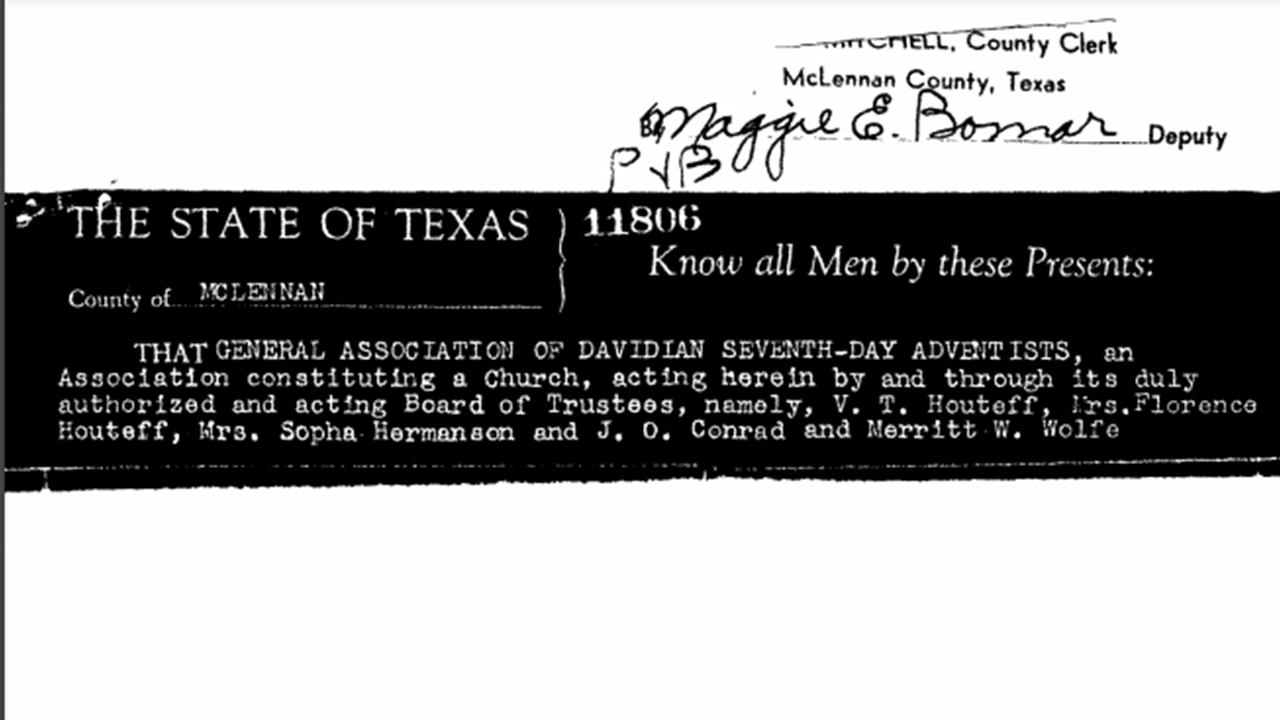 Know all Men by these Presents

THAT GENERAL ASSOCIATION OF DAVIDIAN SEVENTH DAY ADVENTISTS, an Association constituting a Church, acting herein by and through its duly authorized and acting Board of trustees, namely, V.T. Houteff, Mrs. Florence Houteff, Mrs. Sopha Hermanson and J.O. Conrad and Merritt W. Wolfe of the County of McLennan State of Texas, for and in consideration of Ten ($10.00) —————– Dollars cash, and other valuable considerations to us in hand paid by F. A. Worth of the County of McLennan and State of Texas, the receipt of which is hereby acknowledged; have GRANTED, BARGAINED, SOLD AND CONVEYED, and by these presents do GRANT, BARGAIN, SELL and CONVEY, unto the said F. A. Worth

All that piece or parcel of land, situate, lying and being in the County of McLennan State of Texas, and described as follows: Being out of the Universal Publishing Association 189 acre tract on the J. M. Sampler and J.M. Stephens surveys, said 189 acre tract being fully described in deed from Sopha Delle Hermanson et al to General Association  of Davidian Seventh-day Adventists, the tract hereby conveyed being described as follows:

Acting as Trustees of said Association.

BEFORE ME, a Notary Public in and for McLennan County, Texas, on this day personally appeared

V.  T. Houteff, Mrs. Florence Houteff, Mrs. Sopha Hermanson, Merrit W. Wolfe and J. O. Conrad known to me to be the persons whose names are subscribed to the foregoing instrument, and acknowledged to me that they executed the same for the purpose and consideration therein expressed, and in the capacity therein stated.

GIVEN UNDER MY HAND and seal office, this 3rd day of September A.D. 1954