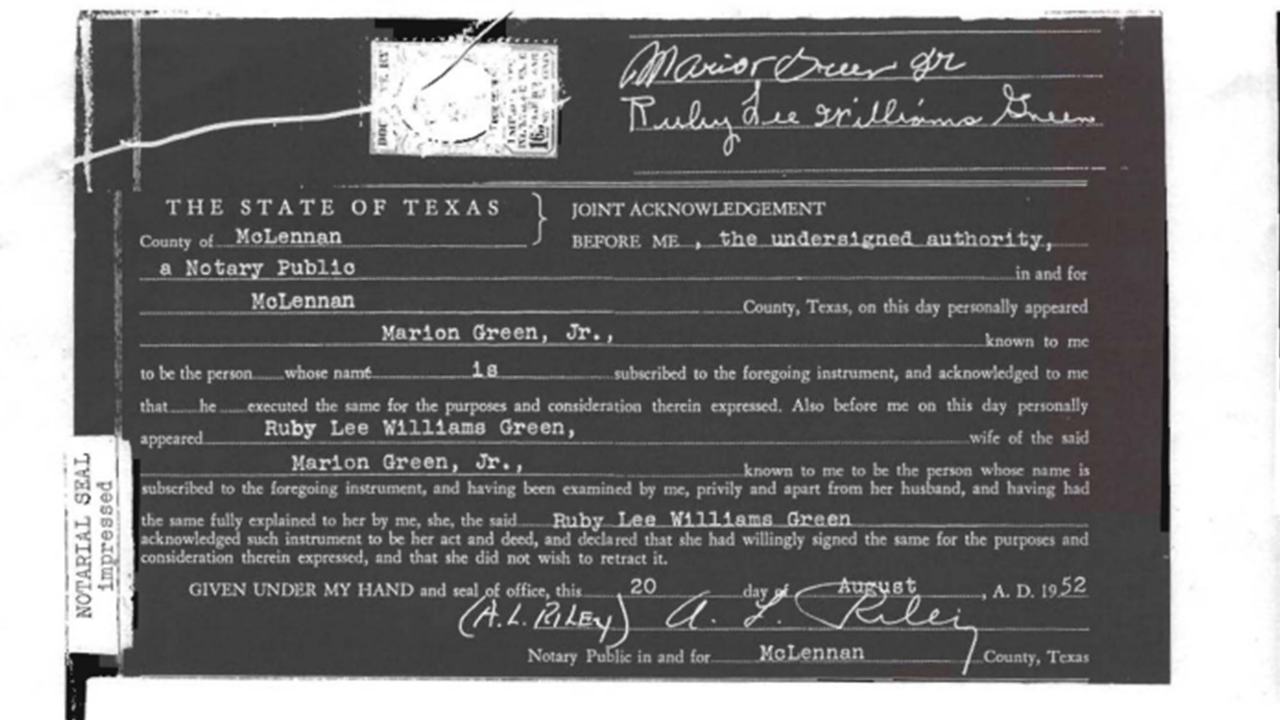 Know All Men by These Presents

That we, A. G. FAREK and wife IRENE FAREK of the County of McLennan State of Texas for and in consideration of the sum of Eighty – Five Thousand and 00/100 ($85,000.00) DOLLARS to us in hand paid by Trustees of General Association of Davidian Seventh – Day Adventists, an Association constituting a Church, receipt of all of which is hereby acknowledged;

Have granted, Sold and Conveyed, and by these presents do Grant, Sell and Convey, unto the said Trustees of General Association of Davidian Seventh – Day Adventists, an Association constituting a Church, of the County of McLennan State of Texas all that certain

Piece or parcel of land situate, lying and being in the County of McLennan , State of Texas, and described as follows: Being 941.69 acre of land, more or less, parts of sections 3, 4 and 5 in Range 4 of the subdivision of the Thomas de la Vega II League Grant on the east side of the Brazos River;

BEGINNING – at a point where the west line of said sections intersect the middle of Waco and Springfield Road;

THENCE – up Williams Creek with its meandering in a general course of N. 45 E. to corner in center of said creek where the same intersects the west line Section 4 Range 3, sold to C. Shelton

The said premises are hereby conveyed by the tract and not by the acre, the acreage not being guaranteed by the grantors.

Witness at request of Grantor:

Before me, the undersigned, a Notary Public in and for said County and State, on this day personally appeared A. G. FAREK and IRENE FAREK his wife, known to me to be the persons whose names are subscribed to the foregoing instrument, and acknowledged to me that they each executed the same for the purposes and consideration therein expressed, and the said IRENE FAREK wife of the said A. G. FAREK having been examined by me privily and apart from her husband, and having the same fully explained to be her, the said IRENE FAREK acknowledged the instrument to be her act and deed and she declared that she had willingly signed the same for the purposes and consideration therein expressed, and that she did not wish to retract it.